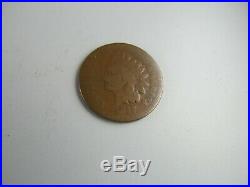 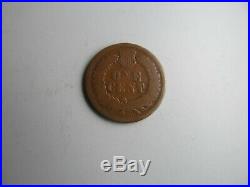 It cannot be understand how rare this coin is, and for most people trying to build a complete Indian Head Cent set, this is undoubtedly one of the coins missing. As you can see from the pics the coin is in well-circulated, but still decent shape. It would come in at an AG grade, very close to a GOOD-4 grade. Some of the lettering on the obverse is faded, and much of it is totally present. The all-important date is completely visible.

The reverse is much stronger and would come in at a GOOD-6 grade if it were graded by itself. It has a nice brown-red finish, it has no major damage, and it has not been cleaned. This is an incredibly rare investment coin that would be the centerpiece of any collection.