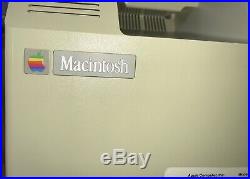 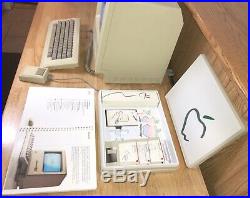 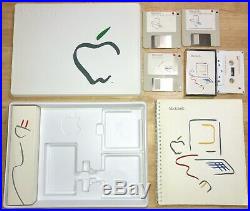 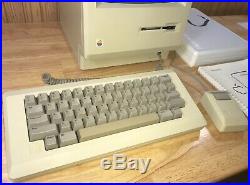 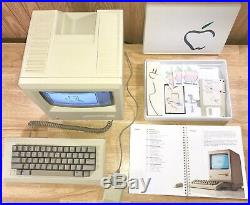 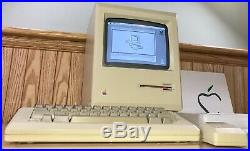 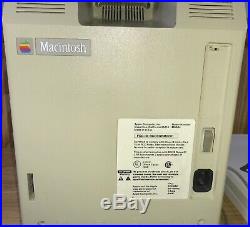 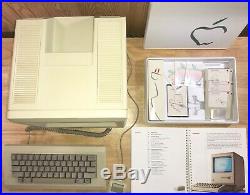 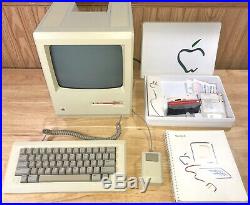 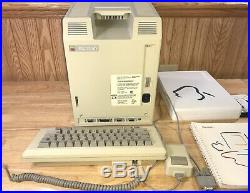 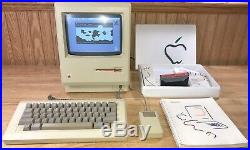 This original Macintosh is fully functional, clean and detailed all around, ready for prominent display and use by the new owner, it needs absolutely nothing! Smoke-free climate-controlled use and storage so no smoke or old musty odors absorbed into any of the included items which greatly detract from condition and value, but of course can not be noticed in online photos, so make sure you know before you invest. I will help resolve any issues and provide assistance after the sale if needed as you get started with your new Macintosh!

January 2019 marked the 35th Anniversary of the launch of this original Macintosh M0001 128K model. The original Mac was introduced with the famous Orwellian'1984' commercial during the Super Bowl on January 22, 1984, and was the very first reasonably affordable personal computer to use a mouse and a Graphical User Interface (GUI) with desktop icons. This Macintosh was produced during week 45 of 1984 as decoded from the serial # label on the Mac that begins with F445 (F= Fremont, CA production plant, 4= 1984, 45= 45th week of year) indicating this Mac was produced during early November 1984, the Macintosh was first introduced and launched in late January 1984. Original keyboard and mouse are week 45 and week 43 of 1984 production as decoded respectively as decoded from their serial numbers. Original'Macintosh' emblem on rear (very late 1984 production M0001 Macs had a revised'Macintosh 128k' emblem starting during week 47 of production, all Macs before then had this original "Macintosh" emblem).

Steve Jobs and the original Macintosh team signatures are molded inside the rear case housing. Macintosh system unit - (Model M0001)- Upgraded with 512K RAM Macintosh motherboard. Original beige/cream color, not all darkly yellowed, discolored, mismatched, marked up, cracked, or damaged like many are now. No marker writing, no stickers or old sticker outlines, no cracks or missing parts, no engravings, only minor imperfections and some minor discoloration as expected for a 35 year old pre-owned computer, very hard to find now in this nice clean cosmetic condition. NO ugly pry marks to any of the case seams of the Mac as this unit was never pried apart improperly with the wrong tools like many were, which greatly detracts from appearance and value as many have large nicks and chips at the seams, but often is not shown or can not be seen in photos.

Screen is bright, crisp, and stable with no burned-in image, or scratches on the glass. No corrosion to rear clock battery compartment, unlike many that have damage from an old battery that leaked out.

All four original rubber feet on bottom of case and clean. Inside of Mac case is exceptionally clean, no corrosion, no dirt or dust, properly stored. Original Sony 400K Single-Sided Internal Disk Drive - Disk insert and eject mechanism cleaned and re-lubed so disks go in and out smoothly like new again. Drive read/write head cleaned and tested.

Included disks load, run, and eject as expected. Original Macs are completely dependent on the floppy drive, as there is no hard drive, so having a properly serviced and tested floppy disk drive like this Mac is essential for reliable use. Original 1984 Apple Macintosh keyboard - (Model # M0110) Includes original curled flexible keyboard cable with undamaged prong clip connectors on each end (clips not broken off like many are now that will not firmly connect), coil cable nice and tight not all stretched out like heavily worn ones. Week 45 of 1984 production from the serial # staring with G445 (4= 1984, 45= week 45). All four original rubber feet still on bottom, clean excellent condition.

All keys are clean and functional, no dust or dirt between keys, every key tested to register working on the Mac display. Original 1984 Apple Macintosh one-button mouse - (Model # M0100) Original early square style mouse connector with screws to attach securely to the Mac. Week 43 of 1984 production from the serial # starting with G443 (4= 1984, 43= week 43). Clean, cable undamaged, rolls smoothly, and working perfectly. This is a matching original set as it came from Apple 1984. Original Picasso Mac Accessory Kit - Rare original Mac plastic Picasso Accessory Kit box. Nice original white color, not all heavily yellowed and discolored or uneven or spotted like many seen now are.

NO cracks to the corners of the lid, unlike most that have splits, chips and cracks to the plastic. Apple logos are embossed into inside tray. Includes "A Guided Tour of Macintosh and MacWrite and MacPaint" audio cassette in original case, and original cardboard power cord sleeve.

Disks fully tested and working on this Mac with the recently serviced internal disk drive. Original disk labels are in very good condition for the age. Increasingly hard to find genuine Apple Macintosh disks like these from 1984 in working condition with original contents!

Macintosh Owner's Guide - Version B from 1984, 160+ pages. No writing on cover or on any of the interior pages. Very nice and clean with all pages and both covers securely attached. Nice clean cover with Picasso-style original Mac graphics, some wear to cover. This original working 1984 Macintosh Model M0001 set will be the highlight of your Apple computer collection for many years to come! DO NOT make offer if you can not pay immediately.

For many more early Apple and Mac collectibles. Soon listing another complete in original retail box early 1984 original Macintosh M0001 128K set if you prefer an original Mac with all the original packaging and original Apple Macintosh matching # retail box!

Plus many, many more early original 1984 Macs to come! The item "1984 APPLE MACINTOSH 128K 1st MAC Model M0001 + PICASSO KIT! NICE" is in sale since Friday, July 19, 2019. This item is in the category "Computers/Tablets & Networking\Vintage Computing\Vintage Computers & Mainframes".