All signed by author, The Vampire Chronicles by Anne Rice, Easton Press, 5 vols 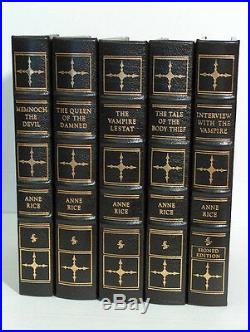 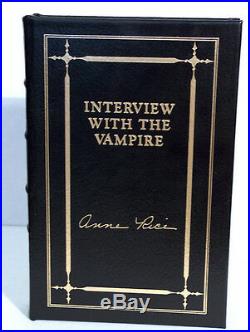 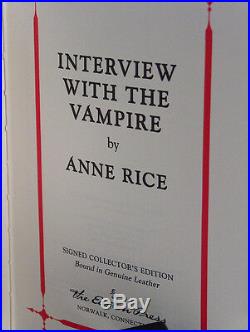 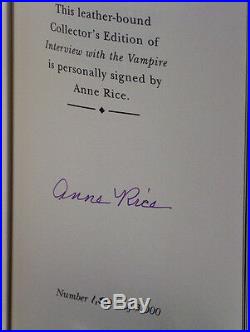 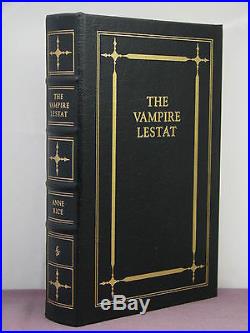 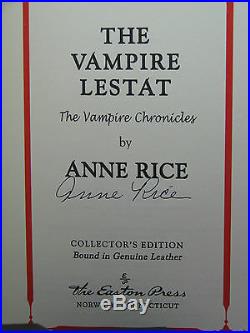 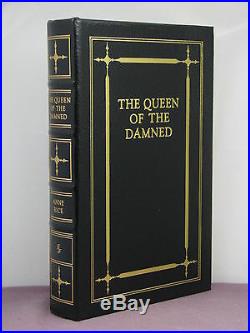 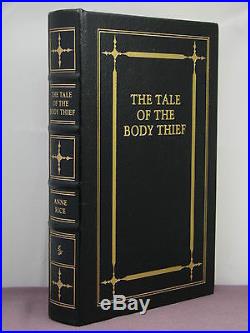 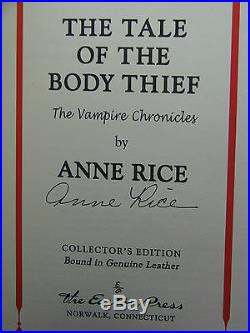 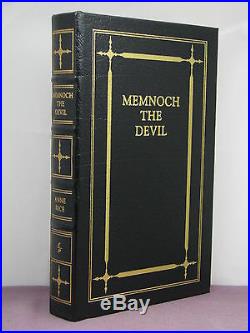 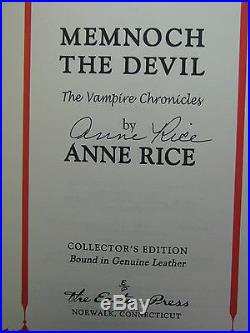 The Vampire Chronicles Interview With the Vampire The Vampire Lestat The Queen of the Damned The Tale of the Body Thief Memnoch the Devil. Easton Press Collector's Edition Five volumes. Description: Five leatherbound hardback books published by Easton Press.

Bound in top grade black leather with 22kt gold lettering and cover artwork. Hubbed spine, acid neutral paper with page edges gilded, and a satin ribbon book mark sewn in. Unused publisher supplied bookplates laid in (not attached) to each volume. Originally issued by Easton Press with only Interview With the Vampire signed by the author on the limitation page without inscription or personalization, I have gotten the rest of the set signed as follows: Signed by the author on the title pages without inscription or personalization.

Volumes 2 through 5 were signed February 17, 2012 at the signing the author did at the Grove Barnes and Noble in Los Angeles for her new book The Wolf Gift. The limitation page states that this is set 1,501 of 3,000 sets produced by Easton Press.

Synopsis: A vampire named Louis tells his life story to a young reporter. While initial reviews of this book were unfavorable, it has nevertheless become something of a contemporary classic in neo-Gothic literature.

It is a novel only Anne Rice could write. [I]t would have been a notable tour de force even if its characters had been human.... Rice's most effective accomplishment, though, was to link up sex and fear again. Voice Literary Supplement - Walter Kendrick.

Rice exploits all the sexual elements in [the vampire legend] with a firm self-consciousness of their meaning. New York Times Book Review - Leo Braudy. I got to the point where the vampire began describing his brother's death, and the whole thing just exploded!

Through Louis' eyes, everything became accessible. But I didn't ask when I was writing what it meant; I only asked if it felt authentic. There was an intensity--an intensity that's still there when I write about those characters. As long as it is there, I will go on with them.

In some way they are a perfect metaphor for me. Publishers Weekly - Anne Rice.

Synopsis: Lestat, who made Louis into a vampire in INTERVIEW WITH THE VAMPIRE, awakens from an ancient sleep and finds himself in the 1980s. Resourceful, enamored of glamour, he becomes a rock star. The novel traces the vampire legend from its origins in ancient Egypt its through European permutations and, eventually, to America.

Publisher's Note: Once an aristocrat in the heady days of pre-revolutionary France, now Lestat is a rockstar in the demonic, shimmering 1980s. He rushes through the centuries in search of others like him, seeking answers to the mystery of his terrifying exsitence. Industry reviews: Rice is a beautiful writer.

Her prose glitters and every character in Lestat's dark odyssey is unique. The grimly picaresque tale swoops and veers into vampiric history, anatomy, psychology, politics, mythology, metaphysics and ethics.

[I]n the classic tradition of Gothic fiction, it teases and tantalizes us into accepting its kaleidoscopic world. Even when they annoy us or tell us more than we want to know, its undead characters are utterly alive. Their adventures and frustrations are funny, frightening and surprising at once. Like her own vampires, Anne Rice seems to be at home everywhere. Like them, she makes us believe everything she sees.

New York Times Book Review - Nina Auerbach.'Lestat' is more than a sequel to'Interview'; it's also a prequel and a supplement, swallowing the earlier novel whole. Synopsis: In the process of successfully "outing" himself as a vampire via his simultaneous career choices of rock star, author, and actor, Lestat has annoyed much of the vampire "community, " who are furious that he has revealed their secrets (even if most of Lestat's fans don't really believe in his bloodsucking ways). More importantly, however, Lestat's antics have awakened the legendary Akasha, the mother of all vampires, and she is not exactly pleased with the way things have been going in the 6,000 years since she last ruled the world. Publisher's Note: Once again, as she did with Interview with the Vampire, Anne Rice reveals the starling world of the undead.

Industry reviews: Although the events that comprise this prehistory of vampire life are often ludicrous, Rice relates them with authority, verve and a well-developed sense of fun. New York Times - Michiko Kakutani. Publisher's Note: In a new feat of hypnotic storytelling, Anne Rice continues the extraordinary Vampire Chronicles that began with the now classic Interview with the Vampire and continued with The Vampire Lestat and The Queen of the Damned.

Vampire-hero, enchanter, seducer of mortals. For centuries he has been a courted prince in the dark and flourishing universe of the living dead.

And suddenly all his vampire rationale - everything he has come to believe and feel safe with - is called into question. In his overwhelming need to destroy his doubts and his loneliness, Lestat embarks on the most dangerous enterprise he has undertaken in all the danger-haunted years of his long existence. The Tale of the Body Thief is told with the unique - the mesmerizing - passion, power, color, and invention that distinguish the novels of Anne Rice.

Lestat, the vampire-hero, enchanter and seducer of mortals, speaks in the new book in the bestselling Vampire Chronicles that began with Interview with the Vampire and continued with The Vampire Lestat and The Queen of the Damned. For centuries Lestat has been a courted prince in the dark universe of the living dead. But now he is alone, and everything he has come to believe in is called into question. Soon he will embark on the most dangerous enterprise he has ever undertaken.

Synopsis: The vampire Lestat's internal religious conflicts are fully explored in this, the fifth volume in the "Vampire Chronicles", in which he realizes that he is being stalked by a creature that even he cannot understand--the Devil. Publisher's Note: In Anne Rice's new novel, the Vampire Lestat - outsider, canny monster, hero-wanderer - is at last offered the chance to be redeemed.

He is brought into direct confrontation with both God and the Devil, and into the land of Death. We are in New York. The city is blanketed in snow. Through the whiteness Lestat is searching for Dora, the beautiful and charismatic daughter of a drug lord, the woman who arouses Lestat's tenderness as no mortal ever has. While torn between his vampire passions and his overwhelming love for Dora, Lestat is confronted by the most dangerous adversaries he has yet known.

He is snatched from the world itself by the mysterious Memnoch, who claims to be the Devil. He is invited to be a witness at the Creation. He is taken like the ancient prophets into the heavenly realm and is ushered into Purgatory. He must decide if he can believe in the Devil or in God. And finally, he must decide which, if either, he will serve.

Industry reviews: Like Interview with the Vampire, Memnoch has a half-maddened, fever-pitch intensity. Narrated by Rice's most cherished character, the vampire Lestat, Memnoch tells a tale as old as Scripture's legends and as modern as today's religious strife. [MEMNOCH] is one of Rice's most intriguing and sympathetic characters to date. Rice ups the ante, taking Lestat where few writers have ventured: into heaven and hell itself.

She carries it off in top form. Condition: Bindings - fine, all books are like new. Dust jackets - none, as issued. If this book is listed as a first edition, it will also be a first printing. We do not consider later printings to be first editions.

We know the difference between a publisher's edition and a bo ok cl ub edition and will always disclose bo ok cl ub editions. If we aren't sure, we will so indicate. In our written descriptions, we use the standard professional bookseller's condition grading on our items (fine, near fine, very good, good, poor). We describe each item carefully.

If the condition description doesn't mention a rem ainder mark or ex-l ibrary markings, they do not exist. We specialize in Sci ence Fiction and Fan tasy but also have general fiction, mys tery and nonf iction. Buyers taking more than 48 hours to pay without that agreement will not receive feedback. This can take 4 or 5 days for US banks (occasionally longer) and up to 2 weeks for international (usually more like 11 days).

Please wait for us to invoice you before paying for multiple items. Price based on weight only.

Two days to two weeks for the 48 contiguous states. Price based on weight, box dimensions and distance. 11" x 8.5" x 5.5 for standard books.

13.625" x 11.875" x 3.375 for large format books. Some extra large books will not fit. Will be used when less expensive than regular priority. Two days to most of the US [overnight cannot be guaranteed due to our location].

Price based on weight and destination. Generally good tracking (depending on destination). Usually more expensive than regular PMI. Please do not ask us to do otherwise. In the first years, our exprience was that the post office would lose a package about every one to two years. The item "All signed by author, The Vampire Chronicles by Anne Rice, Easton Press, 5 vols" is in sale since Friday, June 26, 2015. This item is in the category "Books\Fiction & Literature". The seller is "red_dragon_books" and is located in San Luis Obispo, California.