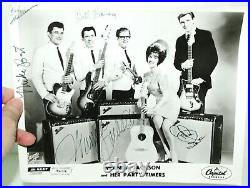 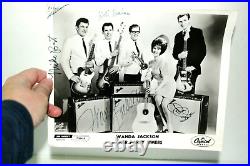 Autographed 8x10 B&W Photo of ALL Members - Wanda Jackson and the Party Timers. This was signed for me personally by Wanda Jackson and all members of her band in the early 60's. The band, named The Party Timers after her hit song "Let's Have a Party". Her Party Timers had several members through time, many went on to become famous like Roy Clark. This time one was Tex Williams who became a recording artist on his own. Other members who signed, are Mike Post, Bill Graham (I believe) and Mike Lane (again I believe that is the name). Wanda Jackson has done it all. She started out country, then crossed over to rock and roll at Elvis Presley's suggestion, back to country, then Gospel/Christian and eventually did some rock and roll revival.

She has been inducted into the Hall of Fame in many states, The International Gospel Hall of Fame and also into the Rock and Roll Hall of Fame for early influences in 2009. She fairly earned the title of "Queen of Rockabilly". Picture is in very good condition.