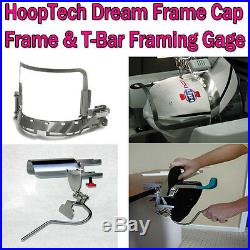 The GEN 2 from Hoop Tech is the next generation HTP style cap frame. Originally called The Dream Frame, the GEN 2 was redesigned to allow sewing closer to the bill than ever before. And it is the easiest cap frame that we have ever made to frame all styles of caps, even visors!

The new GEN 2 from Hoop Tech is the next generation EMS style cap frame. It was specially designed to maximize the sewing field on the front two panels of a finished cap, while still maintaining registration.

This cap frame is lighter, has backing holding clips, is easier to frame, and with the new bill retaining strap you can sew closer to the bill than ever before. The GEN 2 works with all types of caps.

Prodigi Generations PR-600 &1000 Series Baby Lock and other Tajima style drivers. The EMS / Hoop Tech Cap Frames are built tough to stand up to day to day production use. The heavy gage stainless steel construction will give you years of service. The EMS / Hoop Tech Cap frame design allows for variation in cap size, shape and material thickness. When used with the Hoop Tech patented T-Bar Framing gage, framing a finished cap becomes as easy as 1-2-3. The Patented T- BAR Framing Gage. The EMS / Hoop Tech T-BAR framing gage is the first step to properly framing up a finished cap. The T-BAR Framing Gage featuring the exclusive T-Bar Tensioning Arm, allowing the embroiderer to stretch the front panels of the cap against the top of the gage so that when the cap is clamped by the cap frame it is held in the ideal position for sewing. The framing gage with its lever arm, gives the cap framer a 10 to 1 mechanical advantage when getting the cap to lay flat before sewing. This saves a great deal of energy when framing up large orders.

Only Hoop Tech has the patented Tensioning Arm. The Tensioning Arm gives even the inexperienced cap framer the ability to frame a cap tight.. Even low profile un-constructed caps.

Its the easiest way to stretch a cap tight. Once you try it, youll be amazed at how easy it can be to frame a cap.