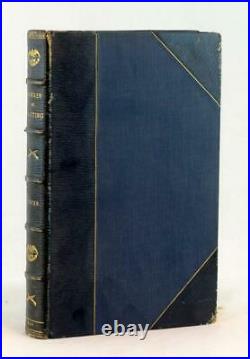 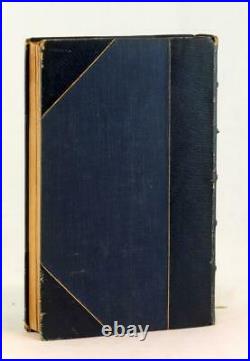 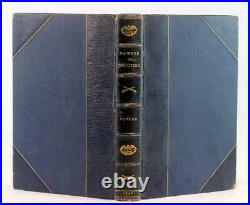 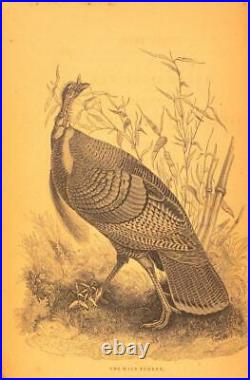 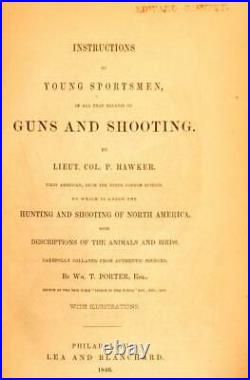 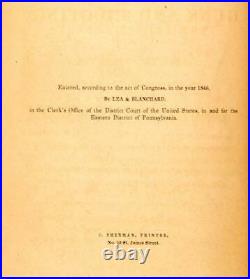 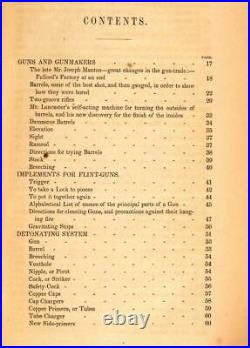 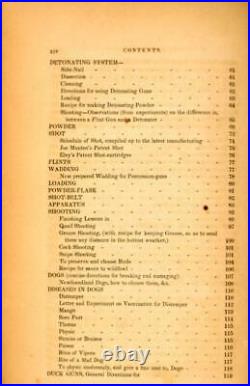 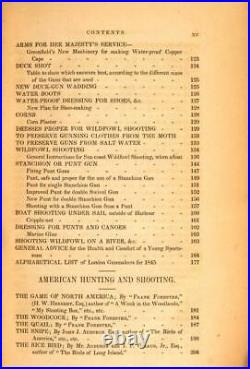 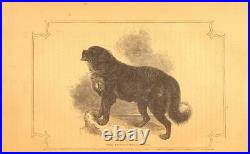 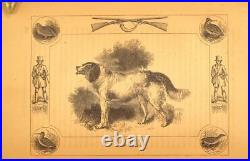 Lea and Blanchard, Philadelphia, PA. 460 pgs +32 pp of advertisements and publisher's catalogue, frontispiece, plus 9 plates, 2 text illustrations. First American, from the ninth London edition. Bound in 3/4 ruled blue leather with matching cloth boards with titles and raised bands present to the spine. Boards have light shelf-wear present to the extremities.

Text is clean and free of marks. Colonel Peter Hawker (24 November 1786 - 7 August 1853) was a celebrated diarist and author, and a shooting sportsman accounted one of the "great shots" of the 19th century. His sporting exploits were widely followed and on occasion considered worth reporting in The Times.

Hawker is best known today for his published works on the sporting activities of shooting, wildfowling and fishing. Hawker published his "Advice to Young Sportsmen" in 1814, a popular work with nine impressions in his lifetime, the latest paper edition appearing in 1975.

Carefully collated from authentic sources by Wm. Hawker kept a regular diary which contains observations of Europe before and after the Napoleonic period and of wild-fowling, game-bird shooting and detailed hunting techniques and conditions prevalent in the late 18th and early 19th centuries. His diary, printed in an abridged form in two volumes, became a popular work. The most recent paper edition appeared in 1988. Hawker also published an originally anonymous memoir of the Peninsula War.

Hawker's attitudes to guns and shooting have been criticised and parodied from a modern viewpoint in The Economist (in connection with teaching children how to shoot), and in The Times (as being overly bloodthirsty). He was even mildly criticised by Sir Ralph Payne-Gallwey, who described Hawker as "something of an egotist" albeit a "good-natured" one in the introduction to the 1893 edition of the diary. Colin Laurie McKelvie, in a forward to the 1988 edition of the diary, found Hawker's personality "unattractive" and observed that he appears unacceptably self-absorbed, cock-sure and downright arrogant. McKelvie mitigates this criticism with praise for Hawker's knowledge, fairness, energy and enthusiasm.

Hawker's inventiveness extended to the development of "detonating" firearms - the percussion lock and punt gunning. He also claims in his diary to have invented a "smokeless chimney". Hawker was a firm friend of the noted gunsmith Joe Manton, using Manton's guns, taking an interest in their design, and participating in the manufacture of some of his own commissions.

Hawker designed a breech-loading swivel gun mounted on a four-wheeled carriage, a model of which was reportedly on display at the Rotunda, Woolwich. In later life Hawker designed a "military musket" and commissioned the manufacture of several prototypes at his own expense. Hawker's musket was favourably received by the Board of Ordnance, but it was not adopted, being set aside in preference to the Enfield Rifle-Musket, although elements of Hawker's design were incorporated into the final version of the Enfield.

OUR MISSION STATEMENT: Our goal is to provide the best books for the lowest prices. Thank you for visiting this listing and we hope to see you again soon! Book formats and corresponding sizes. Approximate cover size (width × height). ALL ITEMS ARE DESCRIBED TO THE BEST OF MY ABILITY!

ALL ITEMS ARE WRAPPED IN 2 LAYERS OF BUBBLE WRAP AND THEN PLACED INTO A CUSTOM FITTED CARDBOARD MAILER. IF YOU DO WIN MULTIPLE ITEMS PLEASE DO NOT PAY FOR THEM INDIVIDUALLY! We do not mark merchandise values below value or mark items as "gifts" as US and International government regulations prohibit such behavior.

(This is a felony in the United States). Showcase your items with Auctiva's. This item is in the category "Books & Magazines\Antiquarian & Collectible". The seller is "lastexitbooks" and is located in this country: US.