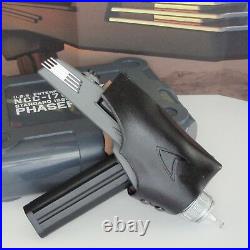 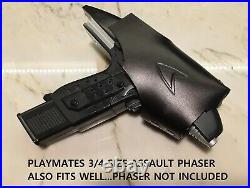 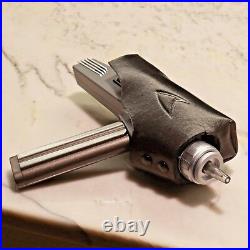 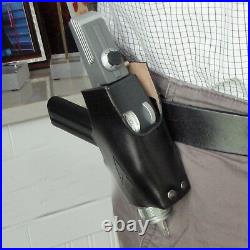 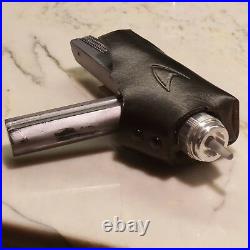 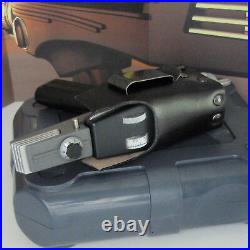 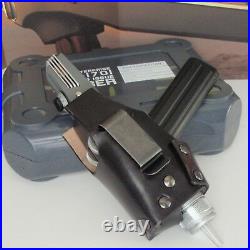 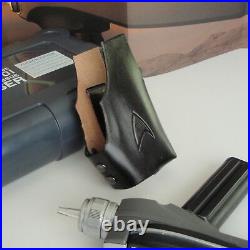 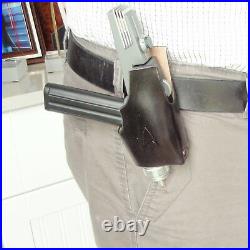 Wand, Roddenberry, Coyle, Other Hero P2s, Art Asylums, Shanko Heros, and Shanko Fiberglass Mid-Grades, Playmates Midsize Assault Phaser. The right Design with the right Lines and Curves that compliment this Iconic. Graceful shape and simple outline. At a convention or Comicon event, carry it with confidence, every lady in Starfleet loves a well hung Rodd.

Easy on-off spring steel Military-Spec belt clip the kind used on real-duty-holsters... The design allows glimpses of; the P1 side-rail and, the controls on top of the P1 and P2, all the while preventing wear and keeping the Phaser safe. Duty holster grade riveted construction with interior below-flush-rivets selected and designed to protect the Phaser from wear and scratching. Belt clip for 1/4 x 1-1/2 nominal belt, up to 3/8 x 1-1/2 if snugly fitted.

Precisely fit to an actual Hero Phaser using a traditional wood form. Holster features Deep Side Cuts for easy removal and insertion into holster so you don't drop you Phaser...

As the trigger might/might-not accidently hit on the holster edge when inserting the Phaser (user defined); you can always remove the laser batteries and still have prop FX. DOES NOT FIT FULL-SIZE MASTER-REPLICA ASSAULT PHASER. Some Star Trek Prop History For Inquiring Minds.

Most of these Prop Makers and Technicians have passed-on. Below are old-timer accounts of convention conversations before conventions were really a fad.

The persons quoted worked for; Desilu, NBC, Paramount & Gene. Was Star Trek's machinist and made all the metal prop parts for all three seasons of the show. Parts were made to order for each episode as in those times (the 1960s) as machining was done by hand and there was no advantage to making short runs (and no studio funding either). Each episode had a specific budget. Speaking of budgets, Bob relied on his Star Trek friend. According to Bob there was no magic drum of Phaser Nozzles and every job was a mad-dash to meet the filming deadlines. Because parts were made only to order, parts varied quite a bit. These variations can be seen in all the surviving examples of TOS hand props from Phaser to Communicators and Tricorders. Sometimes it was not that a new design was needed but rather that when one Wings it from a sketch, in a hurry using what is on-hand, you get an unintended-new-version of something (in the 1960s the TV audience never could see that). Robert Archer and Bob Stone worked closely together so when the show was cancelled suddenly in season three, Robert Archer ended up with a nice collection of hand props. Made the molds for hand props. He also did all the casting and forming. This included; Vacuum form bucks, Fiberglass molds and, urethane molds. Again, according to him most work is done in the normal Hollywood maddening rush. He shared with his convention friends that there were many molds made from molds when the production schedule demanded this. He also shared that when the show ended he rescued the molds from being discarded by putting them in his garage. 1919 was the director of special effects for the show. He handled and repaired many of the props on-set. When the show was cancelled in season three he rescued many hand props and even some models from the scrap heap. Dick Ruben, Prop & Art Assistant on the show, got his Set-Used Klingon disruptor from James. Ruggs held on to his rather large Star Trek collection for many years. It is widely known that Greg Jein got his Holy-Grail Hero Phaser from James. In closing a nod to. A prop technician, who reported that he repaired some hand props hundreds of times as they were often damaged during filming. He had also shared that the fiberglass Mid-Grades, and some other props often used basswood strips between the seams to establish uniform dimensions.

The seller is "susannetrek" and is located in Sarasota, Florida. This item can be shipped worldwide.