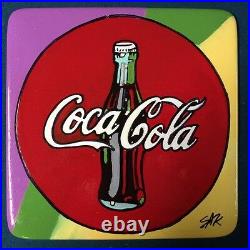 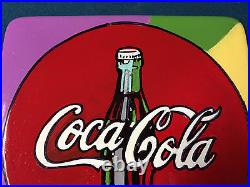 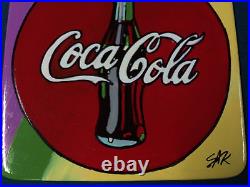 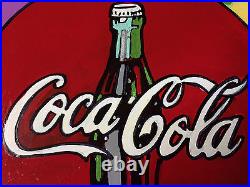 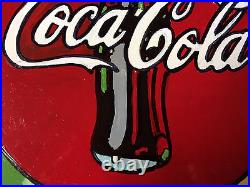 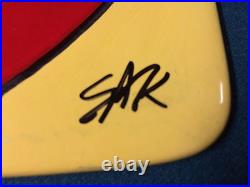 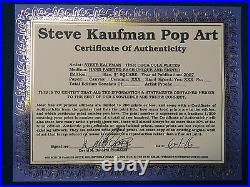 All our items are authenticated by the artist's distributor. "Coca Cola" is an ALL ORIGINAL Painting on a Ceramic Plate.

This is NOT a silkscreen, it is an EXTREMELY RARE - ALL ORIGINAL piece of art by the Late, Great assistant to Andy Warhol - STEVE KAUFMAN! Original Paintings of Steve's, are extremely rare, and highly collectible. Hand Signed and Absolutely Gorgeous!

The Plate has never been displayed (only taken out of the packaging to be photographed). Known for his association with Andy Warhol, Steve Alan Kaufman (December 29, 1960 - February 12, 2010) was a great American pop artist, activist and humanitarian. With the encouragement of his mother, Kaufman had his first show at the age of 8 at a Jewish Temple in the Bronx where he grew up.

At just 14 he attained a scholarship to the Parsons School of Design, while going on to attend Manhattan's School of Visual Arts (SVA) where he met contemporary artists such as Keith Haring and Jean-Michel Basquiat. By 16, Kaufman was going to Studio 54 and mixing with denizens of the 70's New York art scene. In 1981 Kaufman met Andy Warhol, who became a significant influence on the 19-year-old Kaufman, who worked under Warhol as his assistant at his studio, The Factory, producing original paintings and silkscreens. " After graduating from SVA with a Bachelor of Fine Arts, Kaufman held art shows in London and eventually left The Factory to establish his own studio, named "SAK, after the nickname Warhol had given to him based on his initials.

Already an activist, having participated in an early AIDS awareness demonstration in which he was arrested, Kaufman attempted to make an impact on the Homeless issue by hiring homeless New Yorkers to assist him at his studio. He went on to raise millions for the homeless cause.

By the early 90's, Kaufman's work was highly in demand, but he wanted to remain in touch with a broad, public audience. He staged a one-man, one-night show painting 55 "Racial Harmony" murals in New York and appeared on TV and radio to promote racial tolerance. He also created an AIDS memorial in New York City and draped red fabric over the letter "D" of the Hollywood Sign in remembrance of everyone who had died of AIDS. He eventually moved his studio to Los Angeles and in true Kaufman form, hired over a 100 ex-gang kids to assist him in his studio.

During this time he created a new style called "Comic Book Pop Art, " where he used original paintings of super heroes as icons. He also worked with the Martin Lawrence Gallery where he created limited editions of such icons as Beethoven and Coca Cola, breaking sales records for a new artist. In 1999, Kaufman's health began to deteriorate; he had a cardiac episode and suffered a motorcycle accident. Refusing to let his health slow him down, he continued exhibiting, but by 2003 he suffered a major stroke following Art Expo, NY. He designed a slower schedule but still managed to introduce a new art form-his "Uniques"-which were multiple originals of some of his most iconic paintings.

With his health seemingly improved in 2006, he ramped up an exhausting schedule of shows. But he again suffered a series of strokes, eventually dying of a heart attack in Vail, Colorado on February 12, 2010 during a show. Kaufman once said, If I stop doing shows, I might as well stop living. This is what I live for. I had a great life, so please don't cry for me. I've had the life of 100 men. His memory, as well as his paintings, have made history and will continue to be cherished and valued for generations to come. All Auctions must be paid within 4 days. This item is in the category "Art\Paintings". The seller is "artsnsports" and is located in this country: US. This item can be shipped to United States, Canada, United Kingdom, Australia, Japan, China, Korea, South, Indonesia, South Africa, Thailand, Hong Kong, Bahamas, Israel, Mexico, New Zealand, Singapore, Switzerland, Norway, Saudi Arabia, United Arab Emirates, Qatar, Bahrain, Malaysia, Brazil, Chile, Colombia, Panama, Jamaica, Barbados, Bangladesh, Bermuda, Brunei Darussalam, Bolivia, Ecuador, Egypt, French Guiana, Guernsey, Gibraltar, Guadeloupe, Iceland, Jersey, Jordan, Cambodia, Cayman Islands, Liechtenstein, Sri Lanka, Monaco, Macau, Martinique, Maldives, Nicaragua, Oman, Peru, Pakistan, Paraguay, Reunion, Vietnam, Uruguay, Denmark, Romania, Slovakia, Bulgaria, Czech Republic, Finland, Hungary, Latvia, Lithuania, Malta, Estonia, Greece, Portugal, Cyprus, Slovenia, Sweden, Belgium, France, Ireland, Netherlands, Poland, Spain, Italy, Germany, Austria, Kuwait, Croatia, Republic of, Luxembourg.