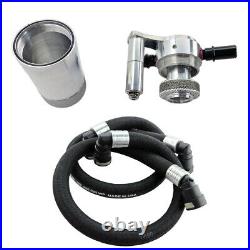 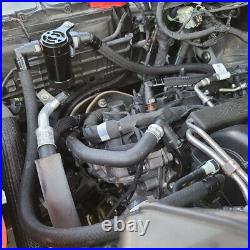 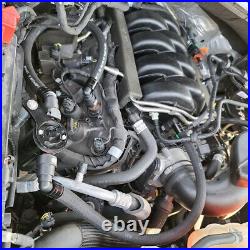 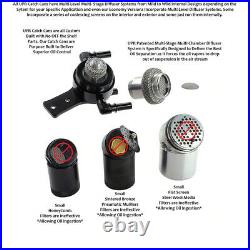 Knurled easy-open easy-close design that you just snug to close. CHECK OUT the UPR Catch Can Installation Instruction section on our website. Not a free floating design that will brake the fittings or hose! Not some' Toy' can that holds 1 or 2 ounces! Simple to check and empty. High Performance Billet Fittings No cheap plastic fittings that get brittle and fail! Hose to return to stock. Incredible OEM look with much higher quality.

Includes everything needed for a plug and play installation. The only catch can to be improved with a Billet catch can diffuser system and included for FREE. What is the problem with your PCV system? The Positive Crankcase Ventilation (PCV) system is used to recycle the gases that leak or blow-by the your engines piston rings and create a positive pressure in the crankcase.

By venting these gases along with oil mist/vapor from the crankcase and route it back into the intake manifold so it can be burned off. This is a poor fix from automobile manufacturers, because over time the excess oil vapor collects along the inside of the intake tract and forms a sludge. This leads to a variety of issues including carbon build up, retarded timing, detonation, power loss and even engine failure. UPR s fix for the PCV system used on many engines for reducing toxic gases from being released into the atmosphere and eliminating positive crankcase pressure / Blow-By. What does a UPR Catch Can do?

UPR s Billet Catch Can / oil-air separator will condense and collect the oil vapor before it has any chance to reach the intake tract. As the gas and oil vapor enters UPR s can they pass through a Chambered filtering system that cools the oil vapor and gives it something to adhere to. Then the oil forms into droplets and collect in the bottom of the UPR Catch Can so that they can later be drained. This is where the additional Chambered filtering system comes into play allowing only the clean air to pass through so it can eliminate unwanted blow by.

All engines have blow by otherwise there would be no need for a PCV system on your engine. PCV = Positive Crankcase Valve, which eliminates Positive Crankcase Pressure. UPR s Catch Can has become one of the most widely used and recommended cures for just about every application.

The engine size and horsepower level is not relevant to the performance of the UPR Catch Can. UPR s Catch Can has become a cornerstone by improving the Performance and Economy on any vehicle you install it on. UPR F-150 (and EcoBoost) Catch Can! The item "UPR Plug n Play Catch Can Oil For all 11-21 F150 Ecoboost 2.7 3.5 5.0 6.2 Silver" is in sale since Saturday, February 20, 2021.