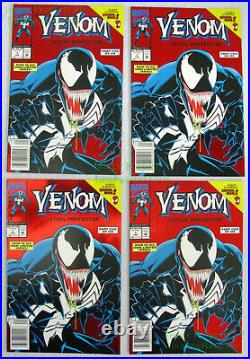 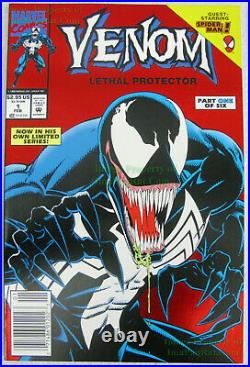 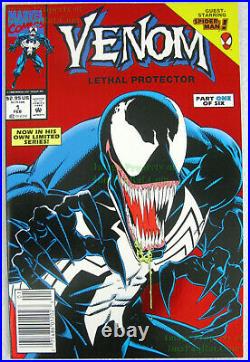 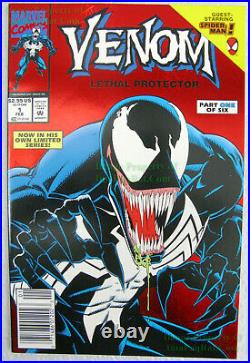 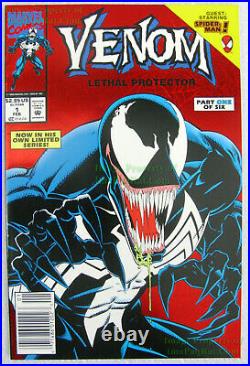 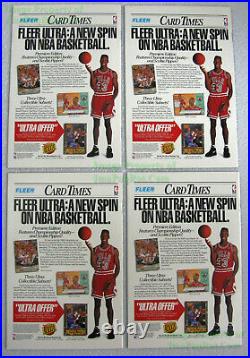 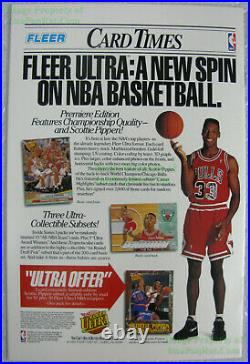 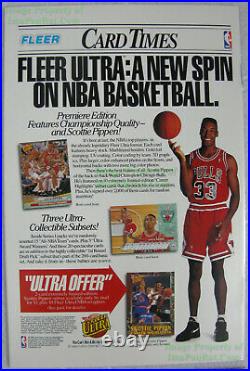 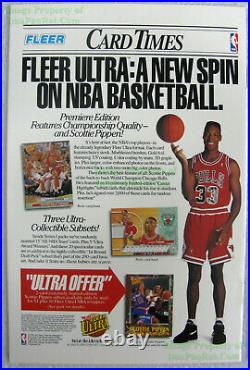 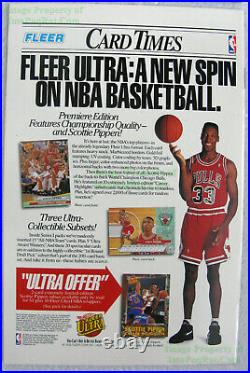 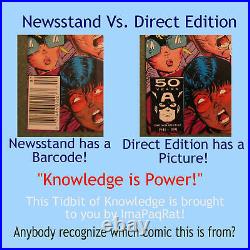 For Sale: VENOM : Lethal Protector #1 [4 Copies]? Venom's 1st Solo Series? Since the massive success of the 1st VENOM move; which was primarily base on the Lethal Protector series; and sensational release of the this Summer's Blockbuster sequel, featuring CARNAGE & SHRIEK ; everything VENOM related has skyrocketed and is only expect to keep climbing!

Be sure to get your NEWSSTAND VARIANT, Complete RUN while it is still affordable! Venom: Lethal Protector: The initial six-part series was published between February and July 1993.

Together, Brock and the symbiote become Venom. In The Amazing Spider-Man #375, Brock makes peace with Spider-Man after he saves Brock's wife (Ann Weying) from death.

Brock then moves back to his home city of San Francisco for a fresh start, starting the events of Venom: Lethal Protector. Initiated the character's transition from unambiguous villain to anti-hero, and introduced several new characters including Venom's symbiote offspring Scream, Phage, Riot, Lasher and Agony, who would recur in Marvel comics until the 2011 Carnage, U.

NEWSSTAND VARIANT Copies are all in EXCELLENT condition with TONS of EYE-APPEAL! Please check out all the BIG PICS and make your own decision on condition. I bought huge overstock comic lots, 40K to 50K comic lots, over 15 years ago. Years before Spider-Man & Venom were so Hot! So most of my back issue comics are Unread, Flat, Overstock GEMS!

NEWSSTAND VARIANTS: Here is some additional newsstand comic information. Newsstand copies are traditionally much harder to find in High Grade condition for a number of reasons. In addition, the racks that newsstand copies were frequently displayed in caused creasing and dog-eared corners just from being inserted and removed from those racks. True obsessive completist will try to collect both the Direct Edition & Newsstand copy for their collection and will always be looking for the HIGH GRADE NEWSSTAND variant. The Very Large photos are NOT stock photos and are of the actual comics you will receive.

Yes, I can grade comics myself, BUT grading is subjective, Pictures are real. Yes I know that'Awesome','Nice' and'Excellent' aren't official CGC / Comic Grading Terms. Check them out by clicking this link!

If you are a VENOM Fan, or a Spider-Man Fan, these would make a Sweet addition to your collection! I had somebody put in a Best Offer and added the condition "Thank You", which was nice, but it kept their offer from being auto-accepted.

Later that night, before I saw the offer, somebody else bought the item at full price. Check out my Feedback and you can see that I aim to please! Did I mention Satisfaction Guaranteed! From a SMOKE FREE & PET FREE location.

COMIC PACKAGING: All comics are Bagged & Boarded, then wrapped it packing paper and finally sandwiched between too pieces of cardboard. I use enough tape to keep the comics safe, but not so much tape that you have to cut the comics from a tape entombment! I cannot control the Post Office, but unless the package is run over or dropped from the Empire State Building, it will arrive in the same condition you bought it in. If you win more than 1 item from me, please contact me, before you pay so I can send you a consolidated invoice. SMOKE FREE / PET FREE!

So no smelly surprises and no dander flying around when you open up your package! We will do everything we can to correct any misunderstandings. Thank You for looking at our Item. Bruce "ImaPaqRat" Fisher Remember: People don't stop playing because they grow old; they grow old because they stop playing!

This item is in the category "Collectibles\Comic Books & Memorabilia\Comics\Comics & Graphic Novels". The seller is "imapaqrat" and is located in this country: US. This item can be shipped worldwide.